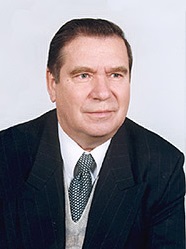 He was born on 21 March 1939 in Novocherkassk, Rostov region (Russia).

In 1961 Yevhen Horokhov graduated from the Donetsk Polytechnic Institute and obtained a diploma of civil engineer in specialty “Industrial and Civil Engineering”, after that he worked at design organizations and at the Donetsk Plant of metal structures.

Since 1966 he has been working in the academic field. From 1971 to 1973 he worked as an assistant lecturer, an associate professor, a dean of Building Faculty, from 1973 to 1991 he worked as a vice-rector for Academic Affairs and Research, since 1986 he has been working as the Head of the Metal Structures Department, since 1991 he is the rector of Donbas National Academy of Civil Engineering and Architecture.

In 1967 Yevhen Horokhov defended a thesis (“Research of the properties and the applications of oxygen-converter steel in structures”), in 1992 he defended a doctoral thesis (“Improving of reliability and durability of metal structures of industrial buildings and constructions under reconstruction”), in 1988 he was awarded with an academic status of professor.

He is the author of over than 400 scientific and educational works, including 13 monographs, 21 normative documents. He has 20 certificates of authorship and authoring patents. He created a hardware system of diagnostics and monitoring of the construction survey, he developed the theory of system analysis, structural reliability of metal rod systems. He reported about the results of these researches on the world and European scientific forums (New York, San Sebastian, Prague, Helsinki and others).

In 2002, the team of scientists, headed by Yevhen Horokhov, was awarded with the State Prize of Ukraine in the field of science and technology for the work “Development of scientific foundations and principles of construction of operationally reliable structures of the main power grids, and their assimilation, production and implementation”.

Under the supervision of Yevhen Horokhov 22 theses and 7 doctoral thesis were defended.

Yevhen Horokhov is a member of the International Association of Corrosion, the Head of Thesis Defense Committee. He is an editor in chief of such journals as “Metal Constructions” and “Proceeding of the DonNACEA”.

Yevhen Horokhov is the Honorary Figure of Higher Education.

He has been awarded with the Order of Yaroslav Mudryi “For merits” I, II and III degrees, “Sviatyi Dmytro Solunskyi” IV degree, the jubilee medal “For valorous work”.

The main scientific interests – ensuring the reliability and durability of metal structures of buildings and constructions.